Sharp Apps can also be published to Gists where they can be run on-the-fly without installation, they're always up-to-date, have tiny footprints that are fast to download and launch, that can also run locally, off-line and cross-platform across Windows, macOS and Linux OS's.

To recap Sharp Apps enable a dramatically simplified and productive workflow where entire Apps can be developed in a real-time without compilation using a JavaScript inspired syntax and access to a comprehensive default library including built-in support for the most popular RDBMS's, Redis, AWS, and Azure that can be further extended with support for plugins.

Electron resolves some of these issues and has seen a surge of popularity vs Native Apps with its more productive web development model and partial support for auto updating, but it still requires a large download and upfront installation.

By contrast, the majority of the download size of Sharp Apps is in the local .NET Core installation and app dotnet tool which are shared by all Sharp Apps, only the app-specific web assets and #Script source files need to be downloaded, making them a lot smaller and quicker to download (and run instantly).

They can even be further reduced by utilizing the resources embedded into ServiceStack like the built-in SVG images and stylesheet and /css/bootstrap.css, which many Sharp Apps take advantage of to reduce their footprint.

If you haven't already, install the app dotnet tool which is the only app required to run all Gist and Sharp Desktop Apps:

Now everyone can launch a Windows Desktop Sharp App by specifying the name of the App they want to open with: 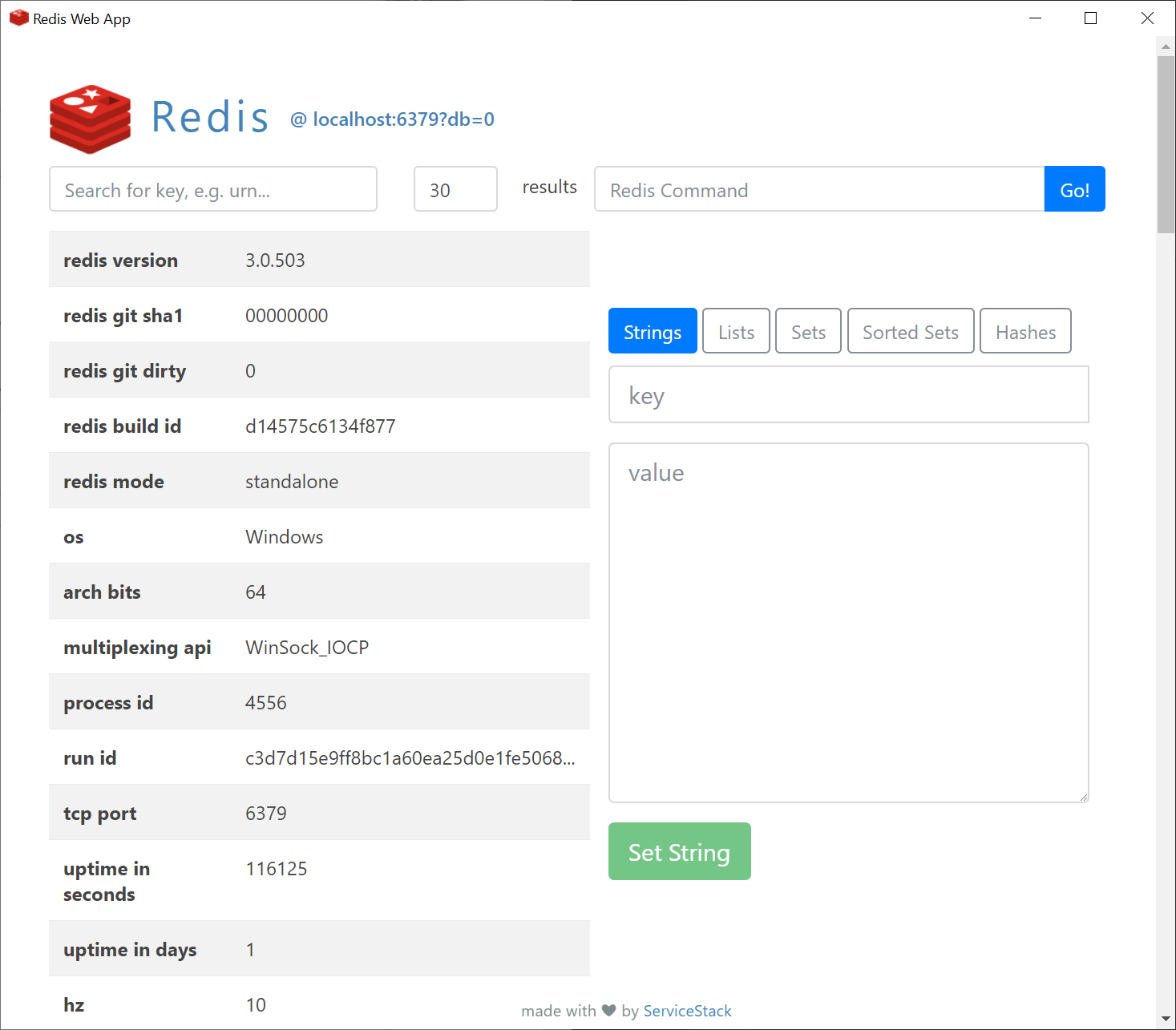 This searches the global App registry for the link to the App, and in this case launches the Redis Sharp App within a Chromium Desktop shell as seen above.

The list of available apps is also visible from the command-line with:

Publishing your App to the global registry makes it more accessible via a friendly name, but if you don't want your App shared publicly or want to test it before publishing, it can also be run directly from a Gist URL, Gist Id, GitHub Repo or Release .zip Archive, e.g:

If you're using macOS or Linux you can run all Sharp Apps using the cross-platform x dotnet tool where it will launch in your preferred Web Browser instead:

Every app command is substitutable with web to run it within your preferred browser in Windows, macOS or Linux

Another unique characteristic of Sharp Apps launched with open is that they always run the latest version of the App, thereby avoiding the need to implement an Update feature or maintain patch release versions.

When Apps are launched with open, a folder is created in the Users .sharp-apps directory, e.g:

This is the current directory that the App is run from and where any files created by Apps will be saved to and preserved across App runs.

For Gist Apps this is an empty folder as the Gist files are loaded into memory, however to support being able to run Apps offline it also serializes all Gist files (after fetching all truncated files) to JSON at:

This is so after Apps are launched once with open, they can then be run locally with:

Which will load the Gist files from the serialized redis.gist JSON blob instead of downloading them from the gist on GitHub. This is useful for times you don't have an Internet connection, or GitHub is down. However as small Apps like redis start instantly, it's preferred to run them with app open redis so you're always running the latest version.

Installing or running a Sharp App will install it in the $HOME\.sharp-apps\ folder but if you want to make changes to it, it's easier to install it in a local directory. For Sharp Apps published in a GitHub Repo you can either clone the repo or use the dotnet tools to install it from the command-line with the new command to specify the Repo you want to download and the -source parameter to specify which GitHub User or Organization.

E.g. you can install https://github.com/sharp-apps/redis with:

Where you can open it in a text editor like VS Code:

And run it in the VS Code terminal window, which during development you'll likely want to run it with your preferred Web Browser to access its Dev tools:

Then you'll be able to make changes to the App whilst it's running to see any changes in real-time.

To modify Gist Apps you can use the mix dotnet tool to download a Gist files contents.
For example, you can download the redis Gist App with:

As Gist Apps are downloaded on-the-fly and loaded into memory there's not much to uninstall just an empty folder and a <app-name>.gist JSON blob which you can either manually delete or get the dotnet tool to do it for you.

This displays a list of Sharp App's you've run at least once:

To delete all traces of the redis App from your system, run:

If we peek into the markdown of app.md we can see the different ways Sharp Apps can be hosted, for redis we see that the entire App is published in a Gist:

Hosting Apps in Gists provides numerous benefits: predominantly they're effectively a free, public, distributed app host which are tied to Authenticated GitHub Accounts and have a public version history of every commit so each change is visible.

GitHub also provides both a Web UI and HTTP UI to manage gists making them easy to modify, both manually and programmatically where you can use their Web UI to make a quick fix - which is instantly available the next time the app is launched.

We've already had quick look at the redis Gist App that provides a nice UI for querying and editing a Redis instance (an example of an App that can't be implemented as a website). Let's have a look at some other Gist Apps that are well suited for development as Sharp Apps: 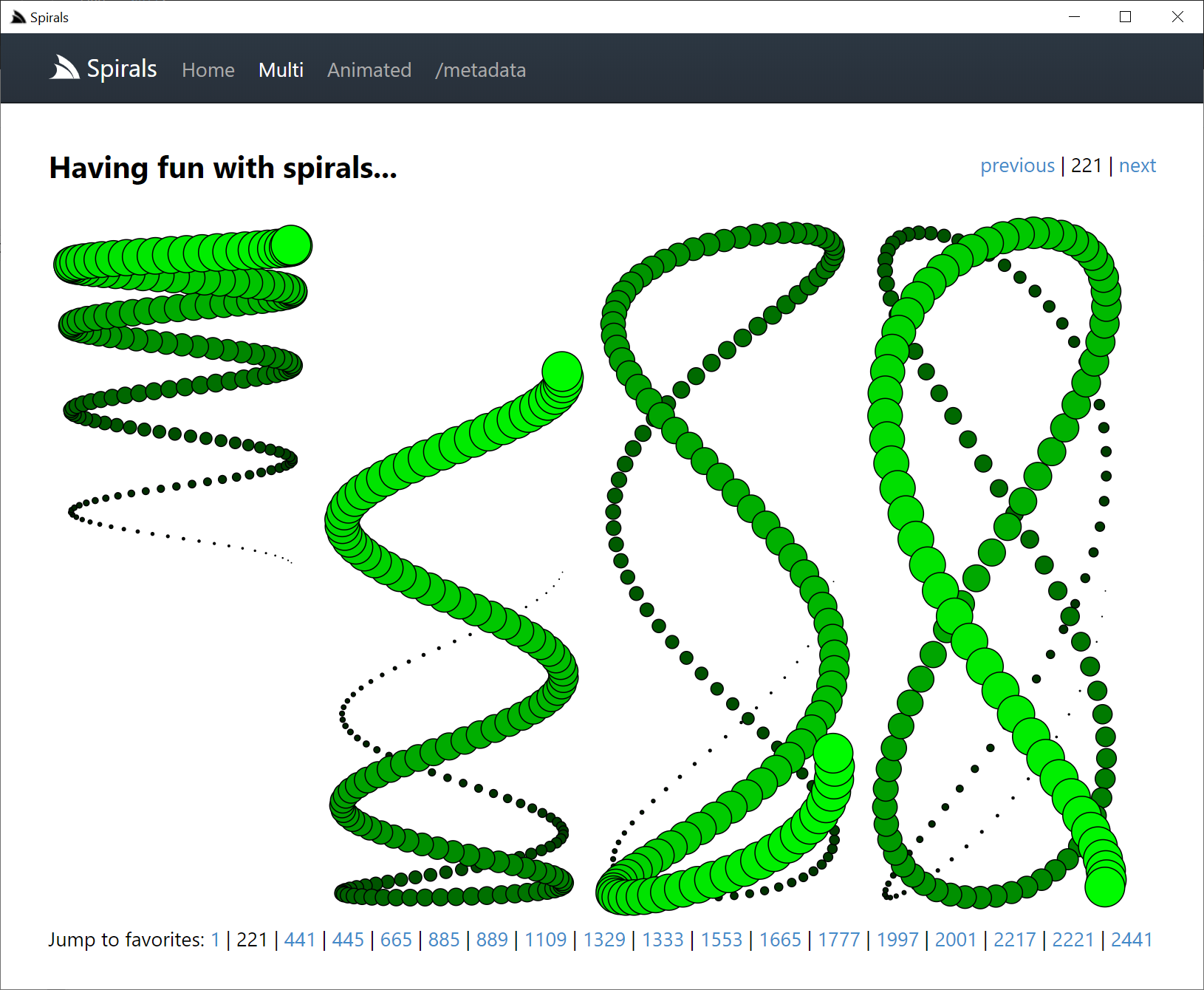 Spirals in an example of a minimally useful App to explore and generate different spirals with SVG that showcases the productivity and live Development experience of Sharp Apps where you can create an App from scratch with just a text editor and the web tool, without a single re-compile or app restart:

Now that we've created an App, it's time to publish it to a Gist. To do this we need to create a personal access token with the gist permission so it's able to create gists.

You can provide your access token via the -token command-line argument:

Our recommendation is instead to set it in the GITHUB_TOKEN Environment Variable to avoid needing to provide it each time.

Before publishing our App, our app.settings looks something like:

To make your App listed in our Global App Directory, include the following metadata about your App:

The appName is the globally unique short alias you want your App to be launched as, e.g:

If your app.settings contains the app metadata above, publishing the app will publish your App to a Gist & register your App's alias to the Global App Directory:

When your App is published the first time, the created gist URL will be saved in a local .publish text file & used for subsequent App publishes.

After it's published anyone will now be able to run your App locally with the global alias (if specified):

Users that are not on Windows can use the x dotnet tool instead to launch your App in their preferred browser:

If preferred, Windows users can also launch your Gist Desktop App in their preferred browser (i.e. instead of a Chromium Desktop Shell) with the xapp:// URL Scheme:

With its built-in publishing support, you can create an App from scratch, publish it to a gist, register it in the App directory - where your creations are ready for the world to use in minutes!

We are not aware of any other Desktop App solution that comes close to this level of turn around time. 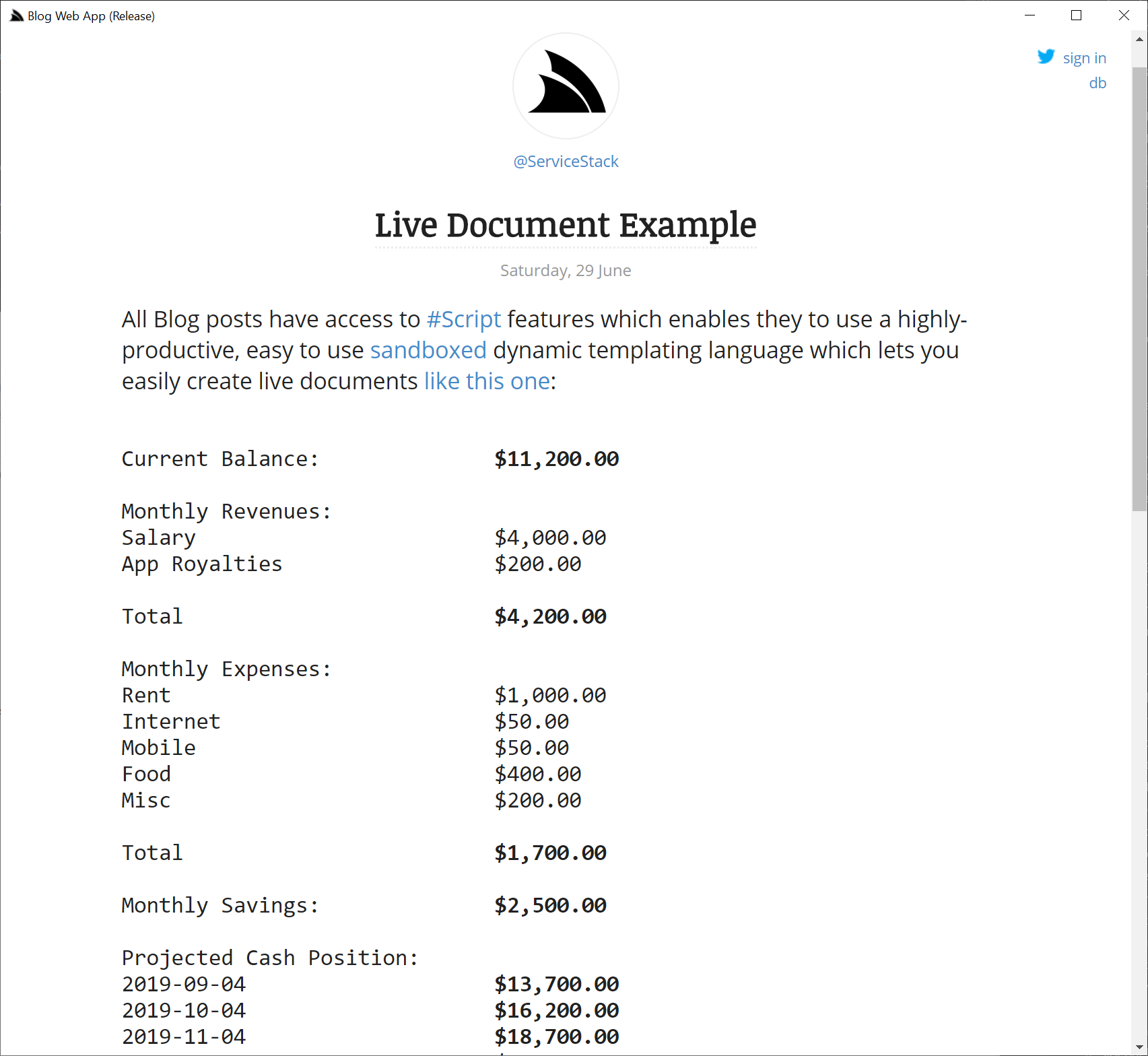 blog is an sqlite-powered multi-user blogging system, that in addition to supporting Markdown, also lets you use #Script in your posts so you're able to post "live executable documents" that can mix both content and executable scripts.

As we envisage sqlite to a popular storage option we'll go through a couple of ways to make use of it in Gist Apps as your Apps Gist files are read-only and loaded in memory where as SQLite is on disk.

To configure your App to use SQLite, add db sqlite and db.connection dbname.sqlite to:

This will create an empty file at $HOME\.sharp-apps\blog\blog.sqlite when your App is first launched.

You can then create your DB Schema and populate your database using Database Scripts in a file called _init.html which is executed just before your App is launched.

The blog App uses this approach for creating its' database and populating it with initial seed data if the database is empty, e.g:

The next time the blog App is run it uses the existing $HOME\.sharp-apps\blog\blog.sqlite and skips populating the database above. 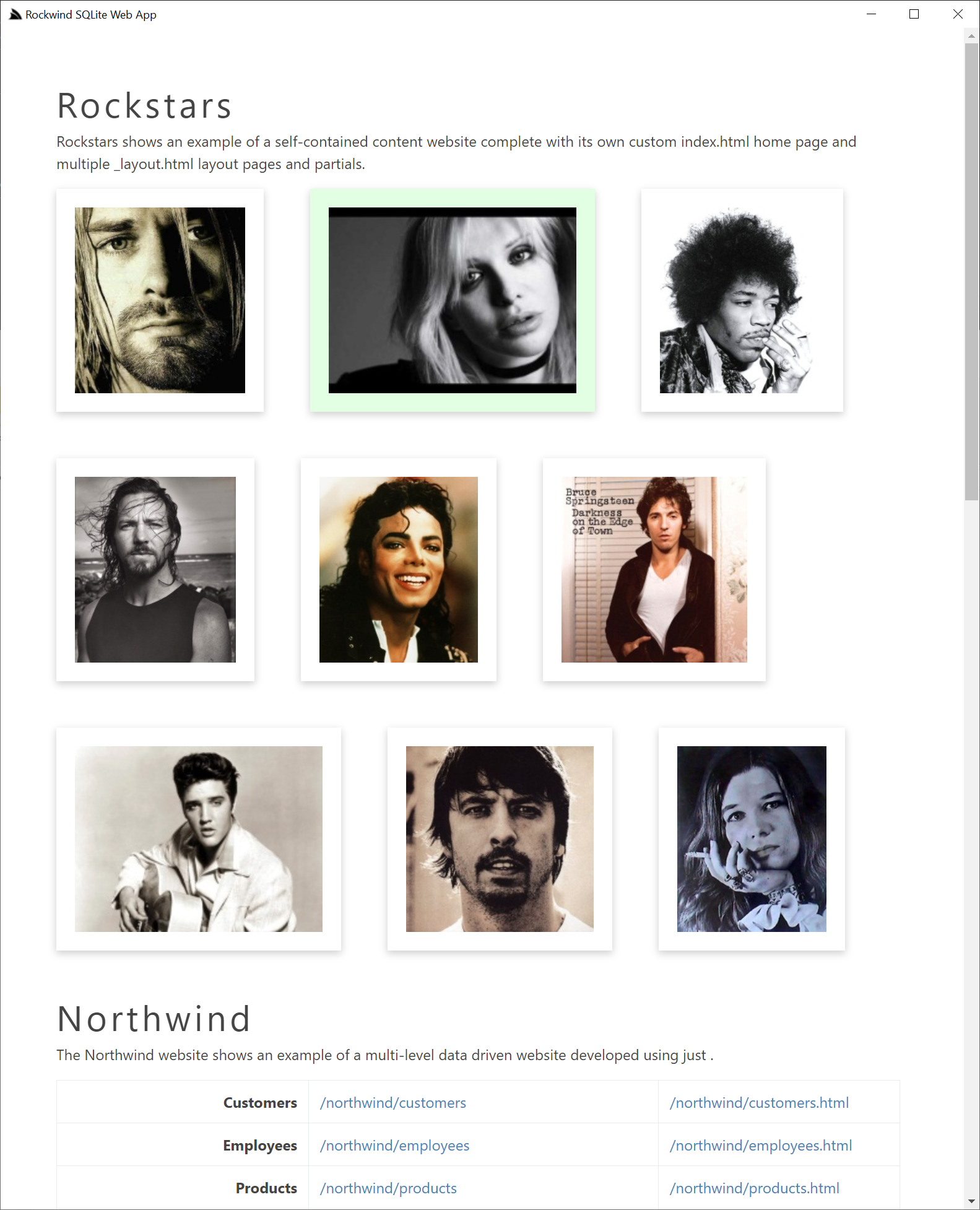 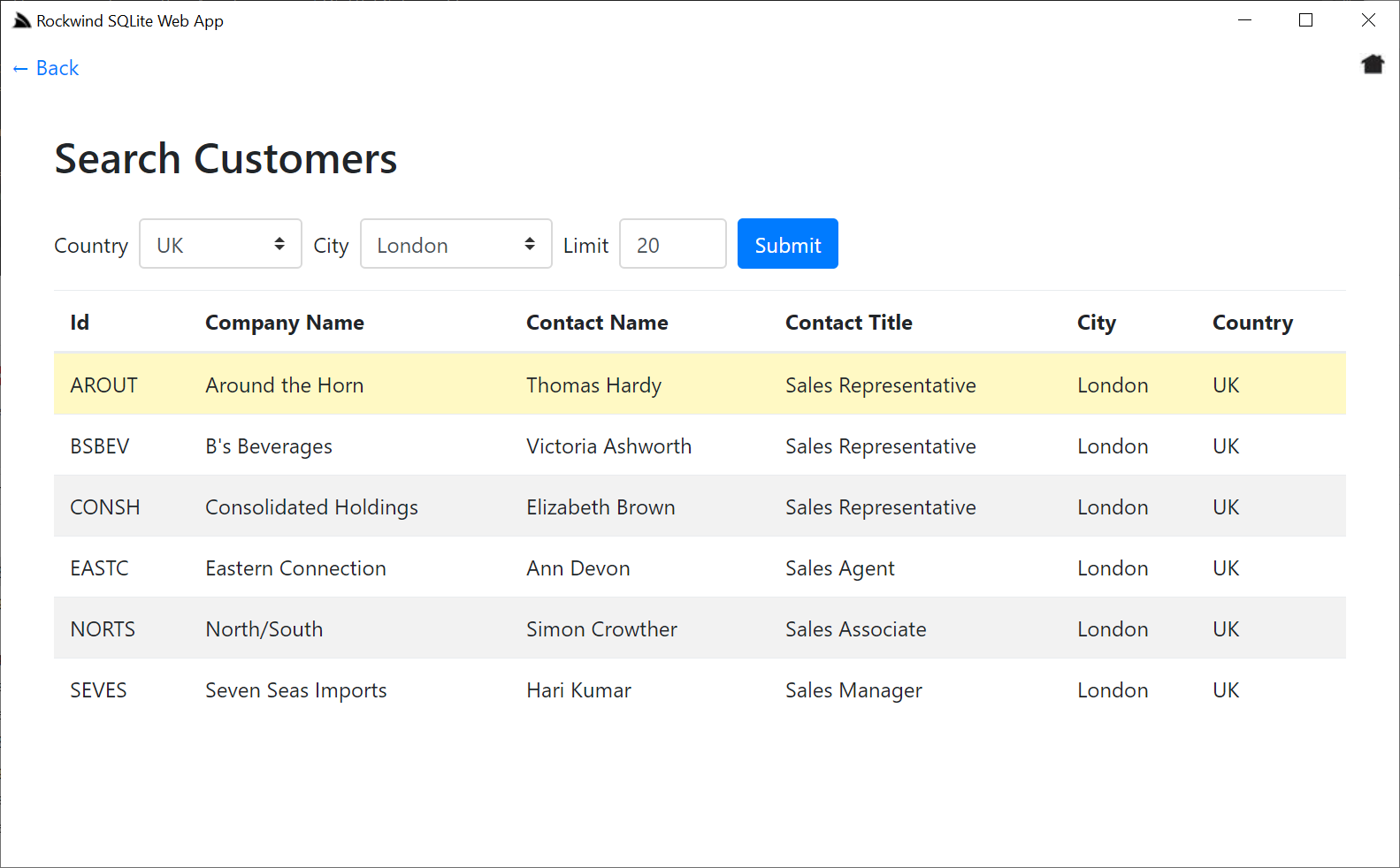 Rockwind is an example of a larger (60+ files) multi-versatile App of hybrid content, data driven App with a UI and Web API over northwind tables that also combines multiple different layouts in a single App.

Its data-driven Web UI and Web API requires the northwind database which is included in the gist as northwind.readonly.sqlite then in the init script it saves a copy to northwind.sqlite if it doesn't already exist:

rockwind contains a number of other hidden useful gems like how easy it is to create multi-linked query reports: 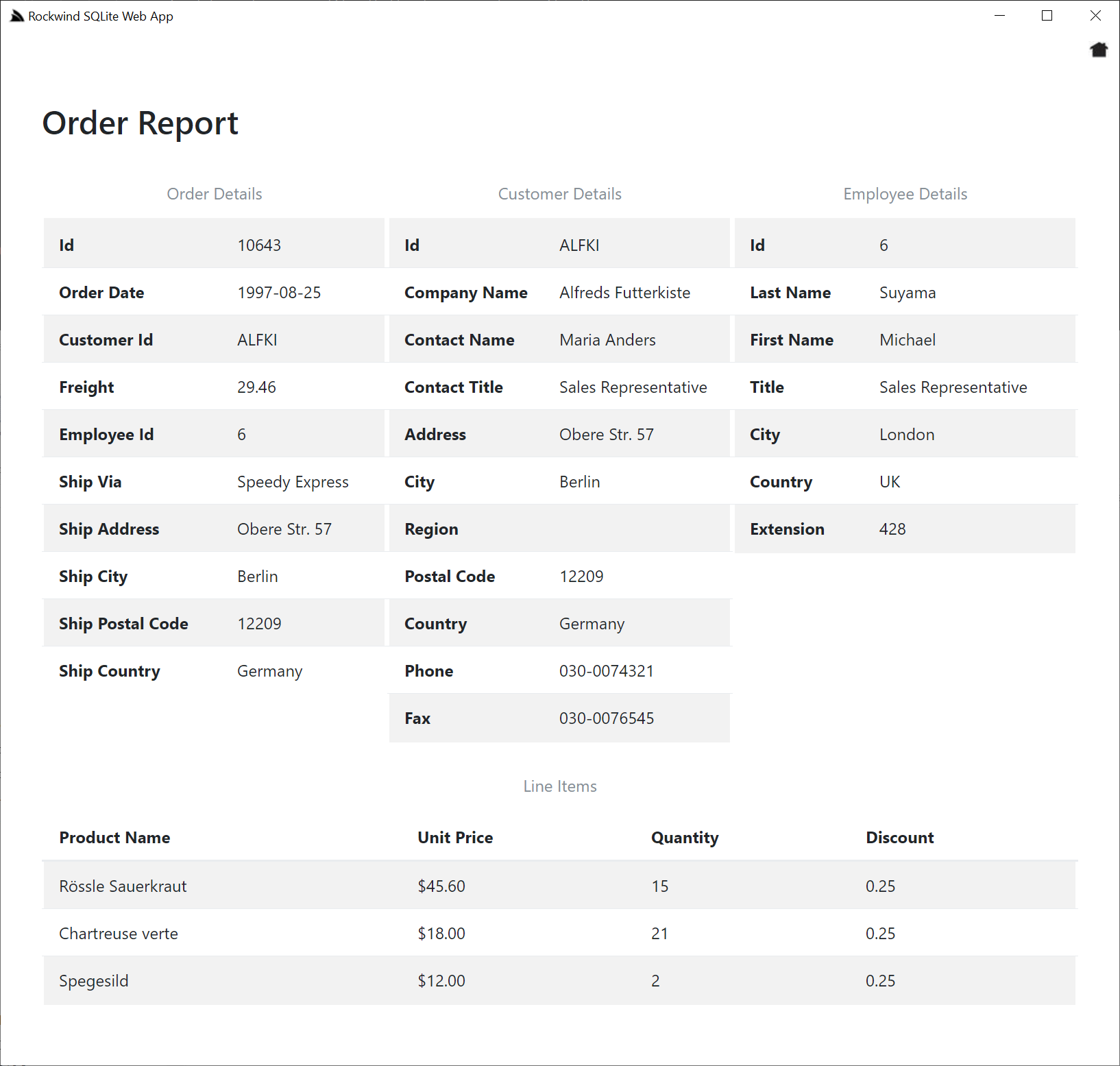 As well as a dynamic SQL Studio UI that re-queries as-you-type: 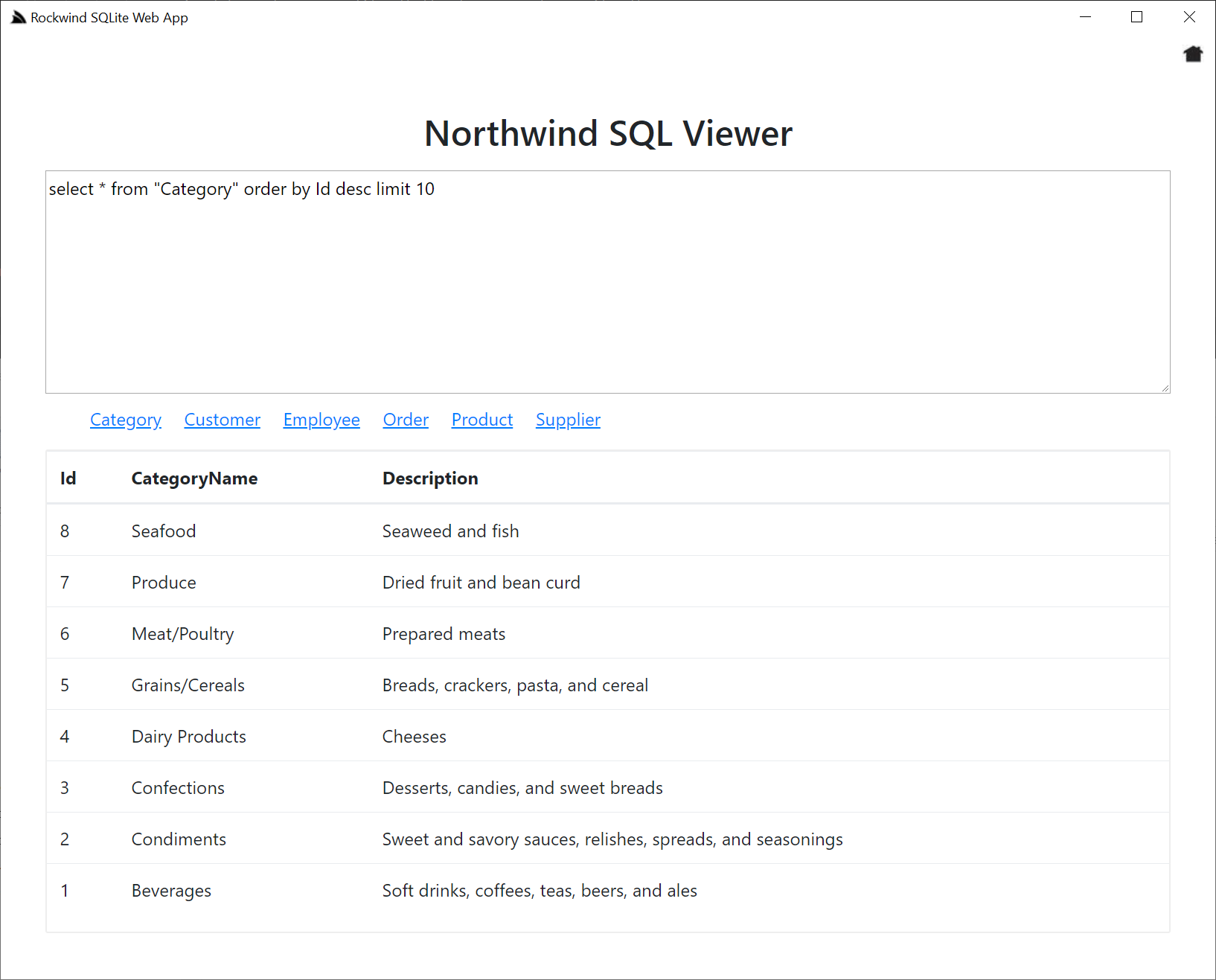 Up to this point we've only seen running Sharp Apps from Gists, but they can also be run from traditional GitHub repos as we can see from the chat App which links to its repo:

The difference between Gist an GitHub Repo Apps is that GitHub repos need to be installed before they're run. When you run a GitHub Repo App with open, e.g:

It downloads the repo archive (either the last released version or current master archive), extracts its contents to the Apps $HOME\.sharp-apps\chat folder then runs it as a traditional Web App where its files are maintained on disk.

As this process takes a little longer to start than Gist Apps you may prefer to use run for subsequent App runs:

Where it will run it from disk, whereas open will nuke the existing install, re-download the archive and extract it again before launching.

For GitHub Repo apps, open is equivalent to re-running install and run each time:

Whilst they work differently, open, install, run and uninstall have the same behavior for both Gist and GitHub Repo Apps, i.e: 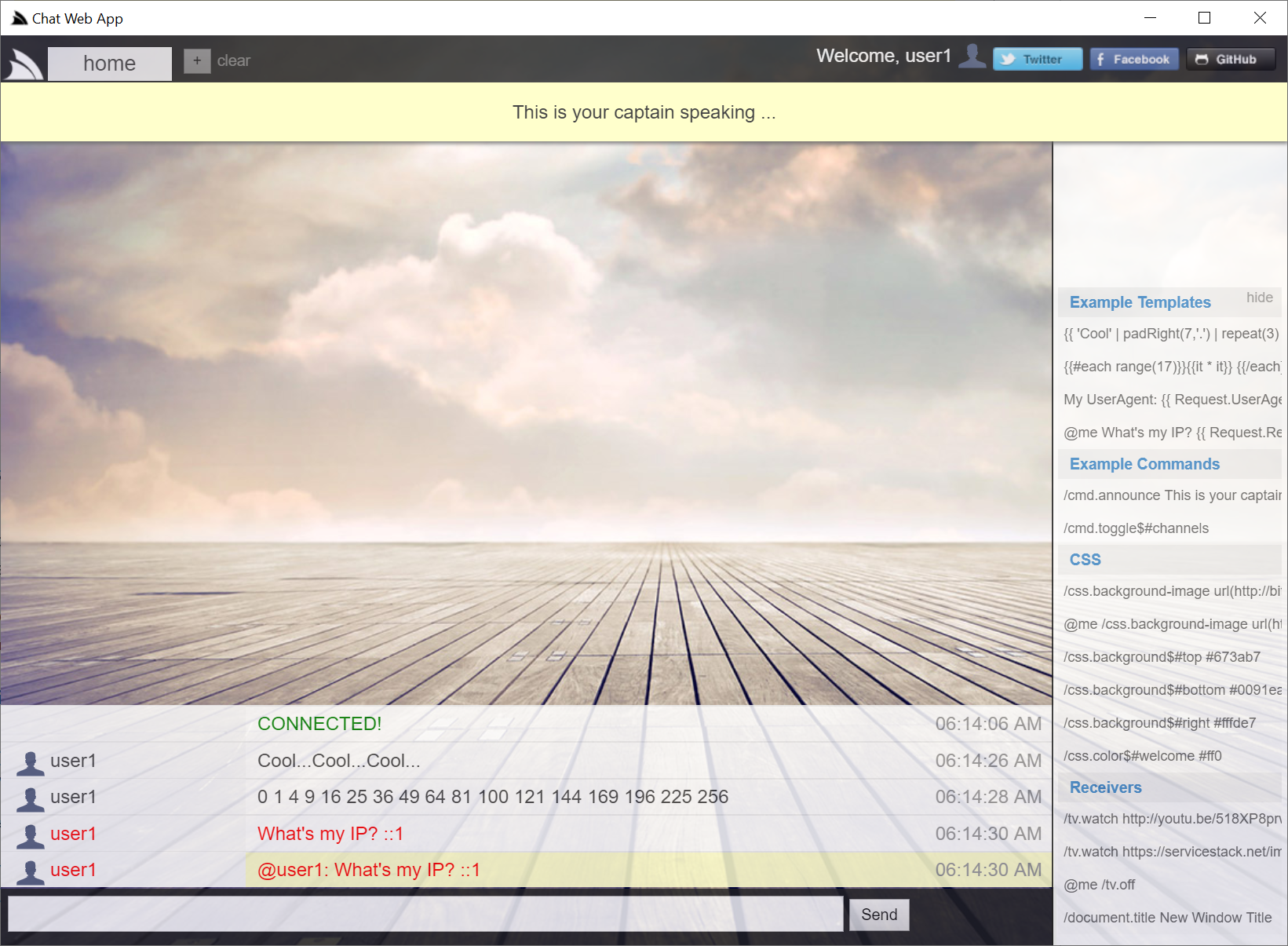 chat is an example of the ultimate form of extensibility where instead of just being able to add Services, Filters and Plugins, you can add your entire AppHost which Sharp Apps will use instead of its own. This vastly expands the use-cases that can be built with Sharp Apps as it gives you complete fine-grained control over exactly how your App is configured.

The last packaging option supported for running Sharp Apps is being able to link to a specific GitHub Release version of your App, e.g:

Which will ensure you're always running the same version of the App which is useful in being able to easily run and compare different App versions or be able to support beta releases of your App that you don't want everyone to use yet.

plugins showcases the easy extensibility of Sharp Apps which allow "no touch" sharing of ServiceStack Plugins, Services, Script Methods, Sharp Code Pages and Validators contained within .dll's or .exe's dropped in a Sharp Apps /plugins folder which are auto-registered on startup. The source code for all plugins used in this App were built from the .NET 5.0 projects in the /plugins/src folder.